The first signs of spring were in the air as  testified this picture.  Wonderful… Finally… Alas, it was short-lived. 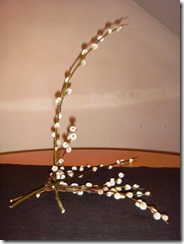 The last gasps of winter still clamoured for attention and we’ve been mercilessly greeted by more snow, rain and below seasonal temperatures.  Forecasters are promising warmer weather soon and a hot summer; we’ll see.  Meanwhile we just have to accept the present reality and look forward to warmer days ahead.

In my previous post I mentioned about having to state which religious affiliation, if any, one belongs to.  As soon as I published my post I suspected it had to do with taxes.  Sure enough, I found the answer almost immediately.  There is an automatic deduction of 9% for Catholics or Protestants, to provide for the many religious events such as baptisms and weddings, and to pay for the salaries of clergy. In North America we receive tax-deductible receipts for our voluntary giving, so that we can receive a percentage of money back when we submit our tax returns. In Germany it is deducted at the source and in most of Europe there are no benefits for giving (which, in my opinion, does make sense; what’s the point of giving if we expect some back.)

Maybe Holy Week doesn’t have such grand processions and venues as I witnessed in southern Spain last year.  Nonetheless, southern Germany’s celebrations are no less impressive. The state of Bavaria might have more celebrations and processions than the state of Baden Württenburg because of its predominant Catholic make-up but that might just be perception.  I am told that the smaller towns are more involved than the larger cities, yet Ulm has a number of events and Bach concerts. The Lord’s  supper (representing Christ’s last supper) took place at the Ulmer Muenster on Thursday evening and again on  Karfreitag  (Good Friday). At this writing, Neu-Ulm and Ulm are combining a narration of the Biblical Easter events followed by an enactment of Christ’s passion in front of the Ulmer Muenster, performed by the Italian Catholic community. Here is a 4″ link to a previous enactment:

and an 8” fuller version (in German and Italian):

This brings me to my observations about the role of religion and faith in this region. I make a distinction between religious observance, largely bound in traditional observance and piety, and faith as the expression of one’s beliefs in God and evidenced in how one lives out those beliefs in everyday life.  The first has little effect on daily decision-making while the second transcends external religiosity and rituals and impacts  one’s decision-making day by day.

Living in the country and around smaller villages gives me a better perspective. Unlike larger cities which tend to be more secularised, village dwellers display more devotion, or at least tradition, in their religious observation although a good number among them tend to be nominal believers.  There are pockets of believers who strive to live according to the Gospel, but the majority are content to go to mass or attend church services, and then carry on as usual without giving much thought on how everyday actions may or may not be disconnected with their Sunday practices. Easter celebrations in reality aren’t much different.

There is still for many a line that can’t be crossed between Roman Catholics and Evangelicals.  The latter either belong to the protestant religion, paid for by the state, or to free churches such as Baptists.  Especially in the villages where one’s affiliation is quickly known, people tend to avoid darkening the steps of the “opposing” camp. On the other hand there are genuine efforts by both clergy and lay people to reach across through dialogue and activities, and promote unity on all sides.  Whether through talks or periodical ecumenical worship services, there are increasing numbers who wish to see Christ’s prayer for unity among believers become reality.  To be sure, certain dogmas and church traditions or differences in Scriptural interpretation may never be embraced by all sides, nevertheless it is encouraging to see these genuine attempts to treat each one with respect and Christian love.

It is interesting that a country that has produced a remarkable  number of great theologians and men of God, such as Luther, Hutter,  von Zinzendorf, Blumhardt, Bonhoeffer, and Warneck, to name but a few among hundreds of them, has become rather lukewarm in or indifferent to its Christian practice.

Yet, there is a longing among the younger generation to find meaning in life. The free churches on one hand and catholic churches of the renewal on the other hand, offer meaning, hope, peace and purpose to those seeking answers as to the why of  their existence, or, more  currently, to the many distressing and frightening world events and escalating natural disasters.  For these, God has once again become relevant and alive. For these too, as for those who practice their faith, Easter remains the high point of why Christ came on earth. The message of Christ’s incarnation, death and resurrection –  redemptive work for all of humanity – then truly comes alive at Easter.

Maybe for most, and not just in Germany,  it is the simplicity of God becoming man, because of His immense love for humankind, that is so difficult to accept or believe.  We are after all so used to taking control of our own lives, that pride often prevents us from giving the reigns of control over to One who would be able to steer  our lives in a way that brings healing to spirit, soul and body.  And that is ultimately the tragedy we witness today: a world wrought with wars, hatred, poverty on one hand, and on the other selfishness, overconsumption,  and increasing immorality; things that in our desire for self-determination destroy our humanity.

Regardless of where we find ourselves on this globe, this Easter we can pause from our various preoccupations and activities and remember why and what we  celebrate. Rather than the pagan carry-overs from the goddess and rites of fertility, the ever-present bunnies and eggs, we can instead  celebrate  the ultimate gift, the Pascal lamb, the life-giving force of the resurrected Christ.

On that note I wish my family, friends and interested followers  a very blessed and joyous Easter! Christ is risen and is alive indeed!

2 thoughts on “Easter Musings from the Ulm Region”