Leaving the magic and serene beauty of the Dolomite range, I left the town of Cortina d’Ampezzo with rain pelting the car ceaselessly until I neared Florence where it was clear and sunny.  My journey to visiting my mom’s birthplace was in it’s second phase.

I didn’t have to regret giving up mountainous hairpin curves as the highway from around Florence onward resembled a giant slalom, alternating with short and never-ending tunnels. Huge warning arrows and flashing lights were no deterrents for the intrepid Italian drivers. Only the prior four-hour stretch of torrential rain slowed them down, when great numbers instantly morphed into snail drivers.

I had hoped to take the secondary roads to enjoy the scenery; alas the torrential downpour put a quick end to that.  It seemed as if heaven had unleashed all its reserves and was now pouring them out all at once. Lacking any surrounding reference point as everything was shrouded in mist and low clouds, I opted for the highway.

Nearing Assisi I was greeted by the imposing St. Francis Basilica  with high atop the medieval citadel overlooking the valley of Umbria..  The dramatic structure comprises two buildings: the lower basilica completed in 1230 and  the upper basilica where work concluded in 1253. 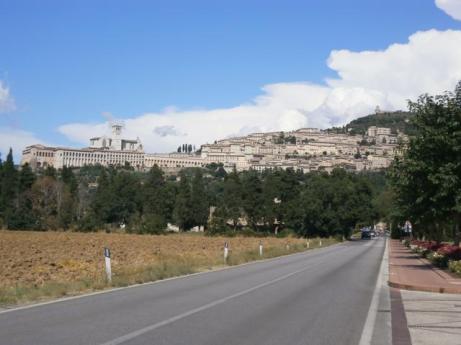 Assisi however dates back to antiquity, starting with the Umbrian people around the 8-9th century, after which the town changed into a centre for Etruscan trade and culture. Assisi was subsequently conquered by the Romans around 295 AD.  Byzantine followed Barbaric invasions, Later Assisi came under control of the Lombards. and eventually  became a free district in the 11th century.  In 1174 the town was besieged by Federico Barbarossa who gave Assisi over to imperial rule.  A short period later, around 1182, Francis Bernardone was born. Through his life and work he not only left a mark while alive but his presence and impact are still felt today.  Although there are many important historical buildings, Assisi is best known as a significant spiritual centre where thousands of pilgrims flock year after year.

When I arrived, the medieval city was throbbing with people strolling the streets, gawking at buildings that withstood the passing centuries as if they had been built yesterday.   Many sidewalk cafes and terraces spilled over with animated chatter and carefree laughter.  Some churches were open past midnight to allow tuckered out pilgrims one more spiritual stop on their journey.  Pilgrims and tourists represent the lifeblood of local businesses , musea and religious centres for 8 to 9 months of the year.

In the Piazza del Comune one is greeted by contrasting structures. 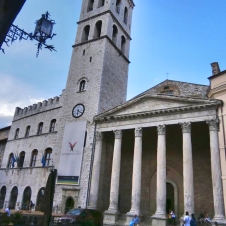 The Baroque-style Church of Saint Mary Above Minerva (Santa Maria Sopra Minerva) built in the first part of the 6th century, was erected on top of the ruins of the 1st century Roman Temple of Minerva, making for a startling effect to the eye. Right beside stands the Torre del Popolo (the people’s tower).

From the Piazza to a street below, is the Painted Vault, which originally led to the city brothels.

The Painted Vault passage with wall and ceiling frescos

The name of the vault was given when a decency wall was built around 1453  thus enclosing the passageway. Remarkable ceiling and wall frescoes dating from 1556 had been commissioned to Raffaellino del Colle.

It is said that they represent ethical codes of conduct but other theories opine differently.  Narrow streets with stone stairs leading to various levels, reveal gothic, romantic and contemporary architecture, some hidden from the casual passer-by.  Whether an intricate wooden balcony, or a complex design carved in stone, Assisi offers uncountable artistic  and architectural riches.

Before exploring the religious sites, I decided to take advantage of the cool of early morning to tackle castle Rocca Maggiore overlooking Assisi.   The climb proved arduous although thanks to a local I took a natural  shortcut to the top instead of the longer asphalted road.  The panoramic view was breathtaking and well worth  the sweat it cost to get there.  The castle itself is still an imposing bastion turned museum with artistic and cultural displays, and interpretative boards on the history if its lords.  The earliest entries date back to 1174 when Rocca Maggiore was a feudal German castle. 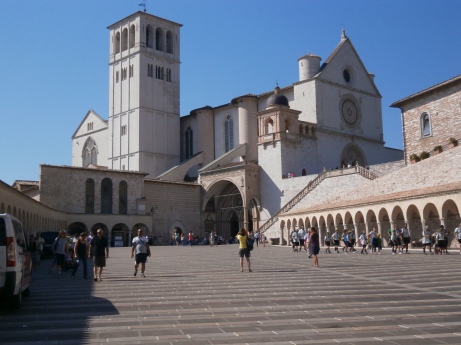 The Basilica of Saint Francis takes up several city blocks.  The upper church is filled with ornate frescoes ascribed to the painters Cimabue, Giotto and their pupils.  Twenty-eight frescoes depict the life of Francis according to the legends of his biographer Saint Bonaventure.

To fetter appreciate the intricate works  of this church, have a look at the following link  http://hoocher.com/Giotto/Giotto.htm

The lower basilica is more somber but nonetheless ornate, as can be seen from the altar below.

A spiral staircase behind to the side of the   altar leads to the Crypt of St. Francis.

The tomb of the saint stands in the middle with a pathway around it, allowing the pilgrims to circles the tomb.

Many respectfully stop and pray at various intervals.  Some touching the walls in reverence.

Offertory boxes are dispersed throughout both churches and the crypt area, encouraging pilgrims and visitors to support their maintenance and operation.

The cross of the church of Saint Damian figures prominently in most churches and religious places of Assisi.. It was this cross that appeared in a vision to Francis, where God would have said:  “Francis, go and rebuild my church”.  This was the turning point in the saint’s life, where he talked away from his family’s substantial wealth, and left his parental home to live a life of poverty.  He would beg for stones intended to rebuild Saint Damian’s church.  The vision had been taken both literally and spiritually, as actually rebuilding the crumbling church but also as spiritually rebuilding the state of the secularized church.

In identifying with the poor, Francis took Jesus’ command to heart, to leave everything behind and follow Him. Francis became known as the father of the poor.  Young men started to join him in his life of apostolic  poverty, gladly giving up their possessions. Francis preached the Gospel to all; the cross of Christ, His death and resurrection and humanity’s redemption through Christ, was the central theme in Francis’s preaching.

As the circle of followers grew, Francis started writing down rules to live by, mostly based on Scripture verses, and organized what is known as the Franciscan Order. Mindful of ecclesiastic authority, Francis submitted the rule for papal approval and acceptance as a regular religious order.

Shortly after his death,  Francis was canonized saint and construction of the vast basilica complex started.  It is ironic that Francis who fled all earthly vanity, would be honored with pomp and opulence. The two-tiered churches stand in stark contrast to all Francis stood for. I believe he would not  have approved and would  have been the first to dismantle all these earthly structures built in his name.

It is interesting to note that Brother Elias was the one who engineered the plan for the structures, with the approval of  Pope Gregory IX.  Both had been close friends of Francis and therefore intimately acquainted with his views and works. The elaborate plans reflect how Brother Elias had become more secular and had begun relaxing rules on poverty by embracing some comforts of life. Dissensions had already started during Francis’s lifetime. Further straying from the strict adherence to poverty that Francis had promoted, caused a split in the order; those who remained faithful to Francis’s ascetic way of life, known as the Orders of the Friars Minor and those who had become less rigid about the order’s requirement of living in poverty.

Chiara Offreduccio and soon after her sister,  were the first female followers of  Francis. They too renounced their familial wealth adopting a life of poverty.  Chiara (Clare) founded the Order of the Poor Ladies, the counterpart of the Franciscans.

The Church of Saint Clare, built in 1257, also has a crypt area where the relics of Saint Clara are kept for pilgrims to venerate. 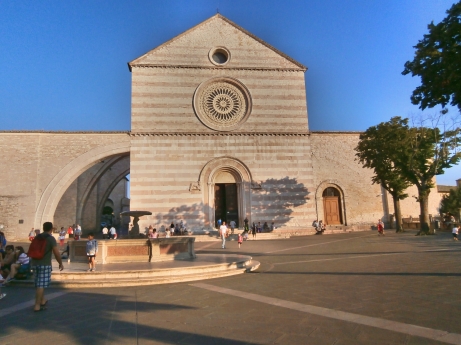 Unfortunately, the danger of giving remarkable and saintly people god-status, is that they become more important than God Himself or more important than Christ for that matter; certainly not something Francis and Clare set out to do.  I have asked several people why they would direct their prayers to saints rather than straight to God; the answers that sood out were: “Because they are added insurance” (in case God doesn’t hear or answer their petitions).  I can’t quite blame the people for this practice but rather the institution that keeps such traditions alive; traditions that represent sources of revenue wherever pilgrims congregate.  Assisi is awash with offering boxes requesting support for the various buildings; calling out  to everyone by their inescapable signs.  Ironically I didn’t see any  boxes asking to give alms for the poor – maybe there are but if so, they were not visible.

or the Hermitage of the Carceri. Carceri (plural) means  both isolated places and prisons.

It was the highlight of my visit.  Located on Mount Subasio, some pilgrims might make the trip to the hermitage on foot; others by car or other public means. It is here where Francis and his fellow friars spent time in prayer in the seclusion of the caves.

Pathway to monastery and forest

The hermitage with its vast forest was a welcome respite from  all the comings and goings of Assisi. A sign on the arch leading into the original oratorio, invites visitors to enter in silence.

This is after all a place of recollection and prayer where  friars still live albeit in the larger complex, which was built  around the oratorio in later years.

The sun-kissed foliage along the path seemed to joyously proclaim the history of its earliest inhabitant.

Tree where Francis preached to the birs

First one to greet us was the famous tree where Francis is said to have preached his sermon to the birds.

On the opposite side of the pathway, contemporary bronze statues of Francis lying on the ground resting, and of three followers looking at the constellations and taking notes. 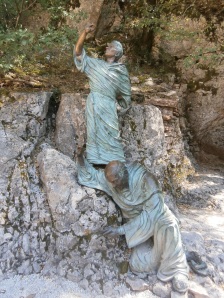 Walking along the side of the mountain, a number of narrow paths lead to individual caves of friars who first joined Francis in his ministry.

Signs of Francis’s devotion to Christ, manifest in the many crosses throughout the forest, beckon pilgrims and visitors to pause  from their stroll and reflect before continuing on the scores of mountain and valley trails.  Here and there, by small streams down the main path, or recesses in the mountain walls, young pilgrims are seated in contemplation.  Some are writing, others are drawing and others again are simply still, eyes closed, bodies caressed by the soft mountain  air.

The wooded areas offer welcome protection from the August sun, in places interrupted by the sudden shafts of rays intruding through the branches, and playfully coloring trees in degrees of green, brown and yellow.

At the end of one path, a small semi-circular open air chapel and altar,  surrounded by roughly hewn trees serving as benches.  This is one of the several areas where Francis would preach.

As I retraced my steps to head back to Assisi, I felt refreshed,  having drunk deep of the peace and other-worldliness of the hermitage..  At the same the feeling was tinged with sadness at leaving this oasis of rest for the noise and bustle of the citadel.

Two days to walk and explore the citadel and all the sights were quite insufficient but that was all the time I could allow on my own way to my mother’s birthplace.  Assisi’s other antiquities will have to wait a future, more leisurely visit.

Next stop, Caposele and my maternal roots….

…. if you’re not pictured out, here are some further impressions of the ancient city.