Christmas was a cosy celebration together with my second son and his family in Antwerp, Belgium.

My son, together with his wife’s brother, cooked up a storm and we were regaled to a scrumptious multi-course spread; oysters, freshly-made soup, tagliatelle and cappelletti (similar to tortellini), and the list goes on. All the rest of us had to do, was sit back, enjoy and shower compliments.

The Belgian Chefs in Action

It was fun to watch the faces of my three grandchildren and their cousins express the different stages of pleasure when opening presents: from curiosity to surprise, to joy. All the while, their eyes brilliant with expectation. Alas, our time together flew by and now endearing memories will stay with me until next time. Notwithstanding all my griping about technology, I’m very thankful for being able to connect and see my spread out family via Skype, thus managing to keep in touch.

Two days after Christmas I was on my way to Best in the Netherlands to visit my youngest brother.

Although we have spoken online, it has been more than a year that we had briefly seen each other and much longer since we spent any extended time together. We enjoyed a pleasant and leisurely five days wandering about, exploring neighbouring villages, like Oirschot, and remaining indoors doing Italian crossword puzzles (Yes, I speak Italian with my siblings). I was even able to convince my brother to learn Canasta. It didn’t take long for him to learn this lengthy card game and he managed to beat me a couple of times, to his great satisfaction.

Best is a large village with a population of about 29,000 in the province of North Brabant. Typical cafes dot the area and we took advantage of the festive season to sample an aperitif, a pint or glass of wine here and there. The closest city is Eindhoven, about 8 km east of Best and at the other extremity lies the small town of Oirschot,10 km away.

The Dutch are welcoming and friendly and it is easy to engage in conversation. Best and Oirschot were no different. We struck up conversations and bantered with fellow-strollers and café owners. Being partly Dutch, and the weather aside, I felt right at home with the people and in the surroundings.

The Dutch do take their bicycles seriously and riders have priority over cars.  Many roadsigns and flashing signs give drivers ample warning of bicycle crossings or intersections. 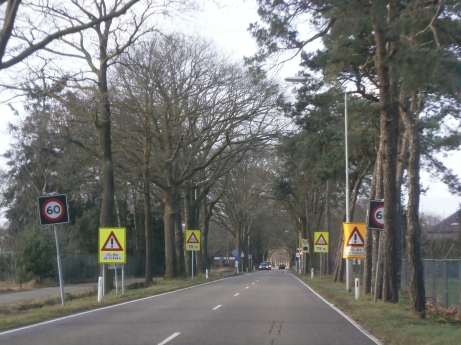 Excavations around Best indicate an ancient Roman settlement. In the village’s centre is the 15th Century Church of Saint Odulphus, the first homegrown Dutch saint. A small wooden chapel was built on the site of his birth-place, later replaced by a stone structure and an additional large edifice, the present parochial Church, was built in front of it. Odulphus was born in 775 to Franconian parents. He was known for his obedience, and for his mission work among the Frisians.

All around are pockets of pine woods and plains speckled with heather. We wandered along several woods every day. Most are conservation areas, and well-marked paths indicate off-limits zones in order to allow nature to do its thing. The region is called Kempen for its sandy soil and stretches from north-eastern Belgium to the south-eastern part of The Netherlands. 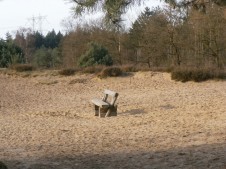 The last conservation area we explored was contrasted by woods on one side and dunes, surrounded by a lake on the other side. We walked in awe of the restful and pleasant scenery. There is something to be said for the flat spaces of The Netherlands, which I find better expressed in Italian: I Paesi Bassi – literally, the low lands; and low they are. Hills don’t rise much beyond those of a dune and half of this kingdom is below sea-level.

The weather was mild for the season, which made our outings enjoyable without having to bundle up in excess. We were either just ahead or behind the misty rain that can pierce through skin and bone. At those moments we were nicely ensconced in the warmth of my brother’s welcoming flat.

I was very curious to see what would happen on New Year’s Eve and how the Dutch would ring in the New Year. Would they go all out like in Germany? Or would it be a more muted happening?

I was not disappointed. We had already been hearing fire crackers throughout the day. At the stroke of twelve however, we were treated to a non-stop spectacle of bursting colours, light and sound.

The fireworks lasted about 1 ½ hours, although at 3: and 4: am, in a state of half-sleep, I could hear sporadic explosions by late night revellers.

Before long I was on the train, homeward-bound.

Cloudburst seen from the train

Having family scattered over two continents and over several provinces and countries, makes travelling quite taxing. Looking at the plus side, I get to compare wide-ranging landscapes and cultural differences. From the majestic Canadian Rockies, to the eye-pleasing hills of southern Germany, to the enchanting heights of the German Alps, to the kaleidoscope of Italian and Spanish vistas, to the plains of Belgium and The Netherlands; the rich colour-pallet and fascinating surroundings are a testimony of the immense creativity of a Master’s hand. God’s handiwork is visible from the smallest moss cropping to the stateliest mountain; each journey presenting new discoveries.

Now that we have rung in 2014, may we all embrace this year with a sense of wonder at people and places surrounding us; savour each day, good and not so good, living to the fullest another year we have been given on this earth. May we strive to fulfill our calling, contributing blessing and harmony to those we encounter and interact with.