It’s all over the Canadian news; every week there is some snippet telling us that cost of living in Canada is climbing, and climbing, and climbing again.  Well, it’s not referred to as cost of living but news anchors rather highlight some areas, such as housing and food and even seniors were mentioned a couple of times.  “It’s costing Canadians more to buy a house. . .”,  “It’s costing Canadian more to buy food. . .”

Well yes, it is indeed and that affects the overall cost of living.

Let me backtrack 35 years ago, when I first migrated to Canada from Europe.  Canada was truly the land of new opportunities and flowing with milk and honey.  As a single mom with four children, it was still a daunting task, but we managed and eventually did better.  That same situation today would have put all of us on the street.  As a matter of fact, this is where more and more Canadians are finding themselves. 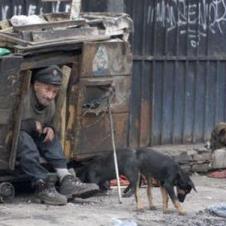 Today Canada is the land of opportunities for the wealthy and the powerful.  What happened on the way to 2014?  From where I’m sitting it looks like good old-fashioned greed!  Canada today is a far cry from the Canada I entered in 1979.  Gone are the opportunities for all: accessible education, housing, work.  A university student can be fortunate to find a menial job that has little to do with his or her degree (in today’s economic climate).

Most surprisingly, we seem to need scientists, engineers and IT people from outside the country because Canadians  (university-educated) are unable to do the job.  This doesn’t compute, does it?  There must be some hidden incentive to large corporations for these practices to take place.  Otherwise it defies logic.

Yet, Canada still touts its opportunities for all – in denial I say – and still believes it’s the best country on earth to live in. By and large, most Canadians believe this too.  Absolutely true, if you’re sitting on a cache of money.

If I sound passionate, I am!  This is close to my heart as I’m finding myself at the same starting point today as in 1979, except that I’m in my sunset years and not really with a world of time ahead of me.  In writing this, I hope to speak for the many people in my age group, who are caught in this spiral of obscene cost of living increases and find themselves squeezed out of reasonably modest golden years. Modest would be good but I fear that’s not the case for a growing number of seniors.

At the same time, I hope to indirectly speak for young families,  single-parent families, along with new immigrants – all who have a burden I hardly had to carry in 1979, compared to theirs.  As these groups are overtaking seniors in regards to poverty, what is mentioned in this post and the next one, affects them also.

Poverty shouldn’t even exist in a country that prides itself on having universal health care, social provisions, education, generosity, and the list goes on.  The truth is that it is living a lie and without squarely admitting to it, matters can’t change.

You can see by now that it will require more than one post to cover some of the issues that keep coming up in the news.

1.    Poverty Among Youth and Seniors:

A disturbing trend for our adults of tomorrow, is the rise in poverty among youth; those who are unskilled and cannot find work or whose families have lost their jobs and are no longer capable of providing for their children.  I would be curious to see whether there is a correlation between the increase of violence among youth, the participation in gangs and the lack of employability and economic security.

In a report, the Organisation for Economic Co-operation and Development (OECD) stated that: ‘Child poverty has risen in 16 OECD countries since 2007, with increases exceeding 2 points in Turkey, Spain, Belgium, Slovenia and Hungary. This confirms a previously identified trend of young people and children replacing the elderly as the group most at risk of income poverty across the OECD.”

It would be interesting to find out where these statistics are at now.  The report prefaced the article by saying that:

The OECD’s report on income inequality, Divided We Stand (2011), documented that the gap between rich and poor in OECD countries had widened continuously over the three decades to 2008, reaching an all-time high. New OECD data show that the global economic crisis has squeezed incomes from work and capital in most countries. Excluding the mitigating effects of the welfare state, via taxes and transfers on income, inequality has increased by more over the past three years to the end of 2010 than in the previous twelve.(Source: © OECD, Crisis squeezes income and puts pressure on inequality and poverty.New Results from the OECD Income Distribution Database, 2013 – http://www.oecd.org/els/soc/OECD2013-Inequality-and-Poverty-8p.pdf)
After taxes and transfers, the richest 10 per cent of the population in OECD countries earned 9.5 times the income of the poorest 10 per cent in 2010, up from 9 times in 2007. The gap is largest in Chile, Mexico, Turkey, the United States and Israel, and lowest in Iceland, Slovenia, Norway and Denmark.

According to the OECD 2010 Statistics:

In contrast to other age groups, the elderly have been relatively immune to rises in relative income poverty during the crisis. In the three years to 2010, poverty among the elderly fell in 20 out of 32 countries, and increased by 2 points or more only in Turkey, Canada and Poland. This partly reflects the fact that old-age pensions were less affected by the recession in many countries (at least until 2010)

It would be interesting to find out where these statistics are at now.  The report prefaced by saying that:

The OECD’s report on income inequality, Divided We Stand (2011), documented that the gap between rich and poor in OECD countries had widened continuously over the three decades to 2008, reaching an all-time high. New OECD data show that the global economic crisis has squeezed incomes from work and capital in most countries. Excluding the mitigating effects of the welfare state, via taxes and transfers on income, inequality has increased by more over the past three years to the end of 2010 than in the previous twelve.

Canada faring worse than others countries

It was illuminating to note that while most participating OECD countries demonstrated that seniors were not greatly affected and maintained relative or better stability, Canada was among three countries where poverty among seniors had increased.  According to a CBC news report, who crunched the OECD numbers, from 2007 to 2010 poverty had risen by 2% to a total of 7% of seniors who are living in poverty; a total of 388,000 live below the poverty line.  That is a considerable number of people.

Women are affected the most but that’s nothing new…

The Global National news stated in their January 28, 2014: “One thing pushing seniors back into the workforce is hefty mortgage payments . . . According to Statistics Canada, many Canadians in their 50s or 60s who quit work, don’t have enough money to enjoy retirement”.  Reporter Mike Drolet, mentioned that more than 50% of 55 to 65-year olds are re-employed within a decade. . .  Their second career last fewer than five years and is 18% of the salary they used to make before.  See the link below for the full report.

2.  What the Canadian Government plans to do for seniors, or does it?

Ontario’s Finance Minister, Charles Sousa, who wants to pursue improvements to the Canada Pension Plan (CPP), stated in a November 2013 interview: “the ‘tsunami’ of workers who will retire in the next few years will hit all the provinces hard, and those retirees won’t be able to survive on CPP”

Not that people today can survive on CPP – let alone a few years from now – with the steady increase of the cost of basic goods and services.

In a December 2013 interview, Finance Minister, Jim Flaherty, said he would not go ahead with any improvements to the CPP because the economy is still too fragile. Increasing contributions to force savings, would add undue stress on employers and workers alike, and would hit small businesses the hardest.  Until the economy recovers he did not foresee any changes.  Provincial finance ministers who had met with the federal minister to discuss the issue, were all in agreement that something should be done but failed to convince Finance Minister Flaherty.  There was no “consensus”.  (Full report at – http://globalnews.ca/news/1033651/flaherty-blocks-cpp-improvement-plans-provinces/)

After that meeting, where most provincial ministers had to back down, Manitoba Finance Minister, Jennifer Howard, said she would pursue the matter alone: “No province wants to do anything that will slow the [economic] recovery, but we do believe with a modest and gradual expansion of the plan, we can accommodate those concerns by employers” she stated.

Whatever the outcome, many seniors in Canada, and those facing retirement soon, won’t be able to look forward to comfortable golden years.  There are other solutions of course and I will keep those for a later post, after presenting the state of Canadian cost of living in my next post.

3 thoughts on “Canada, Land of Milk and Honey, Hope and Future? Think Again!”