This post comes with apologies for the delay, as the past weeks were filled with last-minute revisions to my upcoming book Hijacked! Idols in Disguise, and the launch of a faith course for the surrounding area.

We made our way to Mantua under a steel-gray sky,  It was jus one of those days where the weather was quite unpredictable.  Snaking through villages on the Strada Statale (SS), my niece Alessandra chattered joyously, one eye on the road and one in our general direction.

Once we arrived at our destination, the parking challenge didn’t deter her happy disposition, “no worries, we’ll squeeze this car somewhere”, and so she did.

Declared a World Heritage Site by UNESCO, in 2007, one could soon see why Mantua deserves this recognition. Wandering the busy streets, Alessandra related enthusiastically the must see historical sites, located in the heart of the old city.

The archways were populated with stalls showing off artisans’ wares from art to kitsch. Swimming against the swell of Sunday strollers, we were forced to a snail’s pace before we could reach the historical centre. No point in rushing what would only cause impatient frustration.

We were greeted by impressive vaulted ceilings, somber statues and majestic paintings. This 15th. Century Renaissance structure, commissioned by Ludovico III Gonzaga, took over 320 year to completion.  Construction started in 1462.

The Basilica houses the relics of the sacred blood of Christ, purportedly from the lance that pierced Jesus’s side, by the Roman soldier Longino. Christ’s blood, mixed to the soil where it seeped, was collected and transported and is now kept in the crypt of  the Basilica. Once a year, on Good Friday, the two vessels are displayed for public viewing.

Across from the Basilica, the Rotonda di San Lorenzo is the oldest church in the city.  It was built around the end of the 11th. Century, early 12th. Century. This circular tower consists of dizzying arrays of circular galleries, reaching all the way to the cupola. From the original frescoes that adorned the walls, only a few fragments remain. 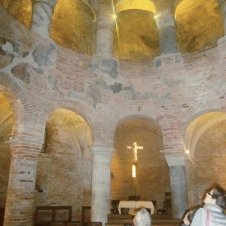 Once outside, we were met by a torrential downpour. We hopped from archway to archway, then ran for cover across one or the piazzas. We headed towards the

Torre dell’Orologio.  The tower forms a rectangular structure of around 1472, commissioned by marquis Ludovico.

The tower of the clock got its name for the antique clock that graces the tower.  The clock has various layers marked with Roman numerals, the signs of the Zodiac, planetary hours,  lunar days and the position of stars, most propitiously influenced by certain planets.

Unfortunately, due to the seismic events of 2012, the tower is closed to visitors. 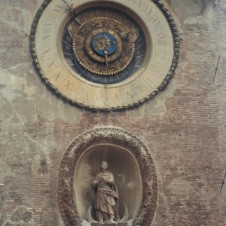 The rain pelted down unabated; our umbrellas hardly offering shelter from the water onslaught.  As by magic, the piazza was now deserted and offered an untrammeled, albeit wet, view of the magnificent structures that frame it.

Despite the weather, the city radiated its own brilliance and personality, defying grey  skies and rainstorms.

The afternoon had progressed; we realized that we had only scraped the surface of Mantua’s monuments.  To see them all would require a few days.  Nevertheless, with our senses sated by beauty, history and solemnity, we returned home, oblivious of traffic snarls and impatient drivers. Mantua, under any weather condition, is not to be overlooked by those who appreciate art and culture.

Back in Germany, we went through a very unusual wet and grey August, a very dreary and foggy September, where a watery sun would make its appearance toward the end of the day.  The skies in this region didn’t seem to make way for brighter days, although a mere  40 km away, the sun was shining.  Now, at the beginning of October, we’re experiencing summer-like warm and sunny weather; go figure….

Until next time,  I wish my family, friends and fellow wanderers in Canada a very happy Thanksgiving!

Check out http://www.writingsphinx.com for updates on Hijacked! Idols in Disguise.