Apologies are in order to my visiting friends who expressed interest about the Wiblingen Abbey.  Having seen the Abbey before, I wasn’t overly impressed comparing it to others who were more remarkable. Roggenburg Abbey is, in my opinion, architecturally and artistically much richer. At the time I was at Wiblingen however, university of Ulm students were milling about, obfuscating the entrance and signs to the library. I didn’t even realize it was there.

When the Italian side of the family came for a visit, we had a quick look online and that’s when the historic library showed up.  Off we went to explore it. The entrance fee is 5€ and for another 4.5€ one may freely take photographs of the library and museum.

The abbey was built in 1093 by Counts Hartmann and Otto Kirchberg, it became home to Benedictine monks. In 1714 it underwent major Baroque-style expansions and renovations. 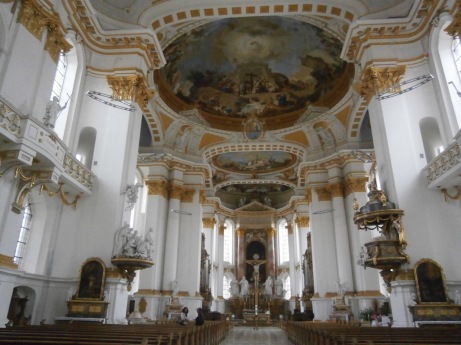 The library’s architecture on the other hand is entirely Rococo and considered one of the finest of that period. It was completed in 1744.

Upon entering the library, one is struck by its elaborate architecture and immaculate state. “A place for preserving treasures of wisdom and science”, the visitor can’t help but be in awe of the intricate gallery work, columns, statues and frescoes. Each represent aspects of knowledge, science and education; the whole forming a harmonious look and feel.

The museum, on the same floor as the library, recounts the history of the abbey and its artifacts.  Some of which can be seen here.

An interesting display was the extended pelt. The first step in the process that eventually will turn it into a parchment.

The library books-catalogue contains a list of forbidden books, kept away from the general public. The books were held in a separate area and accessible to a select few.

In 1806 the abbey’s secularization started in opposition to Napoleon and to evade his rule.  The abbey and its treasures were sold to the highest bidder. During the secularization period, the same fate befell many other monasteries and churches. They became the property of rich landowners. Wiblingen Abbey changed hands several times because of political struggles for ownership. By the time Duke Henry von Württemberg, brother of king Frederic von Württmberg, became owner, the Abbey was almost entirely despoiled.

The Wiblingen library is definitely worth seeing!