Last May, my Italian relatives and I decided on a day trip to Lindau on Lake Constance, Bodensee in German. Ever allergic to highways, I took the pastoral route. Although 45 minutes longer, the scenery was well worth the detour. Peaceful meadows, valleys and zig-zagging roads showed off their colourful palette. The landscape was dotted with cattle and sheep, and thriving farmsteads. There was so much to feast our eyes on, it seemed we arrived at our destination in no time.

Hugging three countries, Germany, Switzerland and Austria, Bodensee is about 63 km (39 Mi.) long and about 14 Km (8.8 Mi.) wide. The island of Lindau is located at the furthest southern tip of the Bavarian Free-state. Lindau’s population is about 24,500. Lindau’s world famous landmarks: the lighthouse and the Bavarian lion stand guard at the harbor’s entrance. 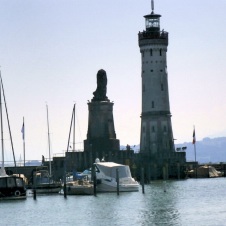 Bodensee greeted us, sparkling like a thousand diamonds, under a glorious sun and cobalt blue sky. We ambled the lakeshore’s boardwalk, then took a scenic boat ride. The ride was pleasant enough, we were nevertheless disappointed, as we sailed too far from the shores of Austria and Switzerland to appreciate the important historic markers. Unless one wants to sail for the pure enjoyment of it, I wouldn’t recommend it.

The Altstatt is gorgeous and covers a substantial area of the city.  Lindau’s history is rich and varied. Historically, Lindau started as a large villa in the year 200 AD; the most remarkable testimony of its Roman origins.  In 882, a monk of St Gall drafted a deed to the city;  the oldest extant  writing where the name Lindau appears. Its meaning: “Island on which linden trees grow”.  The first time the name was mentioned, it harkened back to an aristocratic women’s convent. Besides the nuns, fishermen lived on the island until around 1079, when the mainland market was moved to the island.

Since the 14th century, a bridge connects the island to the mainland and Lindau becomes a thriving commercial city.  In 1528 the city turns protestant.  By changing confession, the city became also a spiritual island, surrounded, on the mainland, by Roman Catholic villages, along with the convent on the island itself. It became annexed for a short while to Austria as a result of the 1789 French Revolution, when all convents and imperial cities were abolished. Over the course of time, access to the city was made possible by ship and train.

All beauty aside, within the city’s folds lies a shameful mark, the outcome of one its magistrates’ participation in atrocities committed to its Jewish citizens. In 1933, Senior Mayor, Ludwig Siebert  became a Nazi Minster President. In 1934 he commissioned a number of window panes. One scene, where Jesus is seen chasing the merchants from the temple, shows the merchant with the dove, with markedly antisemitic features. The St. Stephen Evangelical-Lutheran church displays this racist window pane as a remembrance of events never to be repeated.  One of the house gables in the Altstatt,  declares, denounces and offers contrition for the city’s guilt.

Inscription of Admission and Contrition (right above awning fold)

Lindau, and the entire length of Bodensee, are popular tourist attractions, especially among Germans.  We were fortunate to come here during the week. On sunny week-ends the city is overrun with tourists. The Island and surrounding areas are well worth a side trip!