Portugal was my first experience travelling with a pre-arranged package that included flights, car rental, hotels with half board. My recently widowed touring friend, was travelling solo for the first time. She asked whether I’d be interested in joining her and I accepted right away.

Her late husband’s travel agency had t taken care of the trip itinerary – tailored to include some of our wishes. Unfortunately the agency wasn’t aware of hotels that catered to solo travellers, where the costly single supplement is waived. So we decided to share rooms.

Having vacationed in most Mediterranean countries, we settled on Portugal, which neither of us had been to. The round-trip, with a few beach days at the end, would take about three weeks.

The car rental agency tried to pressure us into taking out additional road insurance. They claimed that we’d be out lots of money should anything happen. After a quick call to the travel agency in Germany, our suspicions were confirmed; all was covered and there was no need for more insurance. Buyer beware! Hapless holidaymakers, especially having flown in from North America and unable to check with their agencies, could end up with expensive and unnecessary extra costs.

We stayed overnight at the hotel Eva, overlooking the marina and part of the Laguna – the Ria Formosa National Park; an ideal location for our short stay. 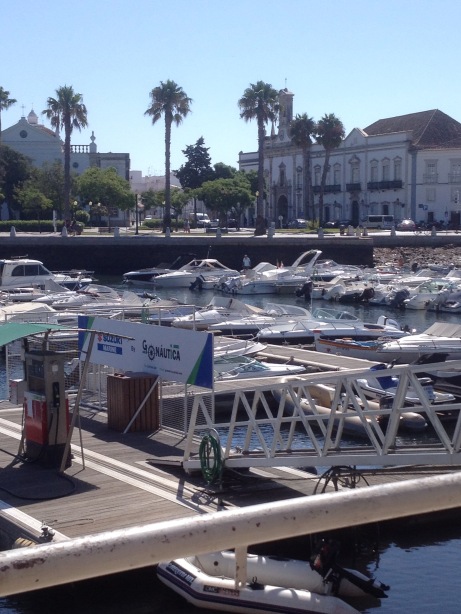 Faro is a lovely city and rich with history but neglected by holidaymakers who head for the coastal areas. Faro is used as a mere landing spot; a transit point for most.

The area, known in antiquity as Ossonoba, was first settled by Phoenicians in the 4th. Century BC. Romans occupied the city between the 2nd and 8th Century. The city was later conquered by the Moors but not before being first occupied by Byzantines and Visigoths.

When King Alfonso III, reclaimed Faro in 1248 and sent the Moors packing, Faro became the administrative seat of the Algarve Province.

An interesting note: during the half century long Moorish lordship, the Jewish community grew to be an important commercial and cultural presence in the region. Some Jewish residents produced written copies of the Old Testament, and in 1487, Samuel Gacon published the first Hebrew print of the Pentateuch.

During the Restoration years (known as the Restoration Wars), fortified walls were built around the city, culminating in a crescent-shaped wall erected at the Ria Formosa (UNESCO World Heritage). This very lagoon acted as a barrier and saved Faro from the devastating Tsunami that destroyed other cities.

After a leisurely lunch at one of the backstreet plazas, we hiked up to the 13th Century old Sé Cathedral. “Sé” stands for Sedes Episcopalis (Episcopal Seat). The belfry offered a gorgeous 180º view of the city and the lagoon.

On our walk back, we stopped to see the cathedral’s interior. An interesting difference to other period churches in Europe, Portugal’s altars are built with several steps (up to 7) running the width of the altar.  These demonstrate how near perfection the person depicted on the altar is – seven being the perfect number.

The ancient city gate, a 18-19 C arch, connects the old town to the harbour. 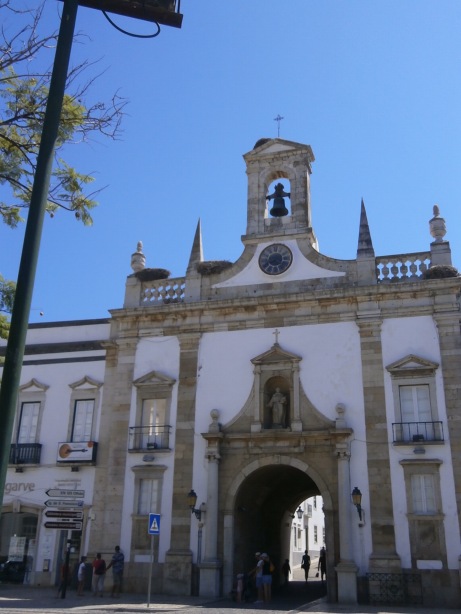 We were glad to have the extended stay, which allowed us to explore this ancient city and we were in no hurry to leave the next morning. We were to arrive to Évora, our next destination, around dinner time, and had the freedom to stop wherever we wanted on our road trip. We planned it so, that we would visit cities in the early evening and then explore a few historical sights in the morning, before proceeding to the next stop on our itinerary. We covered 200 to 250 Km a day, which gave us plenty of room to reconnoiter. Taking secondary roads, we were surrounded by breathtaking and ever-changing scenery, The palm trees and coastal flora were still with us at this point in the journey.

Strategically situated high on a hill overlooking the plains, Beja’s first inhabitants were Celts. When the Romans arrived on the scene in 48 BC, they named the city Pax Julia, and made it the capital of Lusitania. Once Emperor Augustus came along, the city was renamed Pax Augusta. The Visigoths in turn called the city Paca, until the invasion of the Moors in 713, at which time it was called Beja (Baja in Arabic). The Moors ruled the region as the Umayyad Caliphate and the region remained under Muslim rule until 1234, when King Alfonso I retook the city and region.

We hiked up the hill and walked about the castle grounds. According to travel guides and local writings, its marble and granite keep, measuring a height of 40 meters, is considered the highest point in Portugal.

We had a peek at the adjacent pre-Romanesque Santo Amaro church, beautifully white washed and glistening in the sun. Like everywhere else in Portugal, we were greeted by the azulejos, the signature mosaic tradition of Portugal. The azulejo originated  under the Moorish occupation and derives from the Arabic az-zulayj,  meaning polished stone. Portugal continued this mosaic tradition and over the years applied  artistic azulejos to depict important and mundane events, from pastoral to historical scenes and everything in-between. Azulejos form an integral part of Portugal’s cultural heritage and can be seen everywhere, giving the country a lovely cachet.

Back to the car, we headed for Évora where we spent the night at the eponymous hotel.

2 thoughts on “Wandering through Faro and Beja – Portugal”