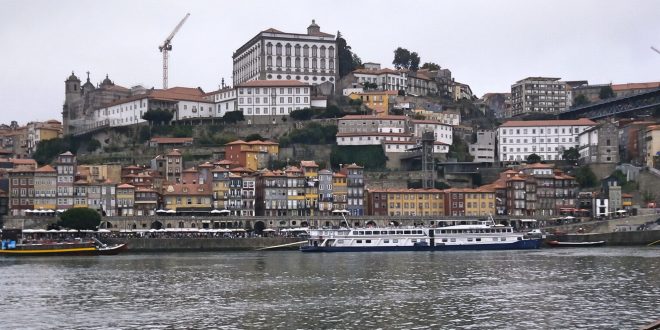 We spent two days at Porto, immersed in its turbulent history and rich cultural heritage. There’s more to Porto than its various delectable Port wines! Chronicles relate a Roman presence in the 4th. Century. Like other Portuguese cities mentioned in previous posts, discoveries unearthed the existence of Celts prior to the Romans.

During the Roman reign, Porto became an influential and buzzing commercial port.

The Moors invaded the region in 711, and in 868, a Christian warlord (a bit of a misnomer) was tasked by King Alfonso III with recapturing the area, which spanned from the Minho to the Douro rivers. The city of Portus Cale was at the centre of it. It was renamed Porto y Gaia, and subsequently Portugal, thereafter established by Count Vîmara Peres as the county of Portugal.

The marriage of João I to Philippa of Lancaster, daughter of John of Gaunt, formed a strong and lasting military alliance between Portugal and England, which still continues under NATO today. The shipyards of Porto were instrumental in establishing the 14-15 Century Portuguese Fleet. Under the 1703 Methuen Treaty, trade between the two countries flourished as the treaty facilitated the exchange of Port wine and English woollens.

When England was at war with France, wines were hard to come by and Porto provided just the ticket; Port wine became the substitute for French wine.  The English set up a trading post in 1717, and peu à peu they took over the production of Port. Local winegrowers, cornered by the large producers, revolted in what was called the Revolta dos Borrachos (or Revolt of the Drunks). This revolt stood as an emblem of Porto’s free spirit.

Just when you thought I was going to stop the historical account, wait, there is more. Porto endured the invasion by Napoleon and his troops in 1809, and was the scene of the  liberal revolutions that were crisscrossing Europe in the 1820s. A second revolution tried to free Porto from the absolute power of the Spanish King Miguel, which resulted in his abdication. The city was proclaimed: “Cidade Invicta” or unvanquished city (I guess the Invictus Games attest to being unconquered). The final step came in 1910, when Portugal was declared a Republic.

We passed St. Ildefonso Church on our initial discovery stroll. The steps up and the square surrounding the granite structure, give this 18th. Century church an imposing presence. The beautiful façade of the church is made of 11,000 azulejos (tiles) created by renowned artist Jorge Colaço. The azulejos represent vignettes from St. Idelfonso’s life and from the Gospels. The interior panels were decorated by the Italian artist, Nicolau Nasoni. St. Idelfonso Church took thirty years to complete. It was built, in honour of Idelfonso of Toledo, a Visigoth who was bishop from 657 to 667. Over the years, the church underwent several major renovations and repairs.

We wandered through the old city streets; climbing ancient stairways that snake through back alleys. We discovered architectural  and colourful gems, quasi-hidden from passers-by. Below us hummed the ever-present  bustle of tourists on the famous Caís da Ribeira, one of the city’s main streets, alongside the Douro river.  Porto’s residences are a panoply of brightly coloured structures; harmonious and pleasing to the eye.

As evening approached, we crossed the historic Dom Luís I bridge to the harbour side, home to all the Port wine cellars and stores. An array of cafes, restaurants and Port tasting shops lined the quay. It was difficult to decide which tasting venue to select. In the end we settled for a couple whose names weren’t that well-known (at least to us). The bouquet and flavour varied; each port wine presenting its own unique delight. 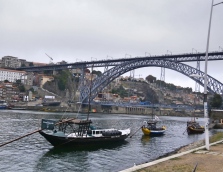 We had only seen the harbour viewpoint from the old town and as we now ambled along the wharf taking in the charming city perspective, the sun slowly set and lights started to add magic to the whole scene. 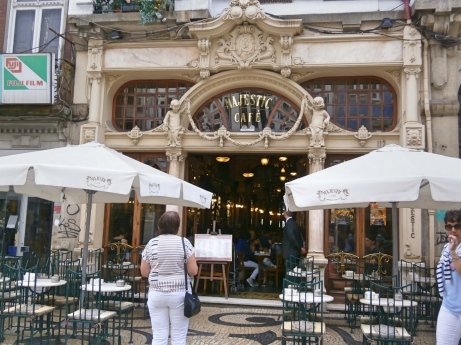 Before setting out on our historic wanderings, we stopped for coffee at the famous Majestic Café, established as Elite Café at the end of 1921. The interior decorated in Art Nouveau, brings to life the glory of the Belle Époque. Leather upholstery, decorated ceilings, marble columns and wall to wall Flemish mirrors provide a sense of luxury and comfort. Sitting at our table, if felt as if time stood still. It is not difficult to imagine the Majestic as a magnet for poets, novelists, bohemians and intellectuals debating life and politics. 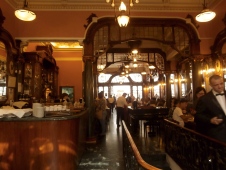 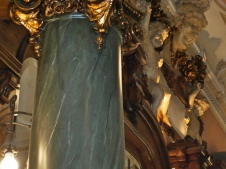 Completed in 1410, this Gothic church with Baroque interior decoration is the best example of its kind in Porto.  What started as a modest church around 1240s, in honour of St. Francis of Assisi, became the present Gothic church, built under the auspices of King Ferdinand I.

In the early 18th. Century, the interior underwent elaborate changes, reflecting the mood of the time. Baroque altar pieces and other sections contrast with the sober Gothic style. The different side chapels, altars and ceilings are covered in gold from Brazil. The only original Gothic artwork is the intricate rose window at the church’s main entrance.

Two altarpieces of note, are the large statue of St. Francis just inside the entrance of the church and the “Tree of Jesse” in the north aisle, dating from 1718. The tree represents the genealogical tree of Jesus, and depicts the twelve kings of Judah up to Jesus.

Architecture and history buffs, St. Francis Church will not disappoint!

The vast crypt is accessible through the church. Nobility and a number of Franciscan friars are buried here as the mural plaques attest.

A visit to Porto cannot exclude a walk to and through Bento Train Station.

As soon as we entered the station, we were awestruck by the huge ceiling-to-floor tiled scenes. Our senses were overwhelmed by the magnitude of the work. It took a few minutes to decide where to start following the mural stories. 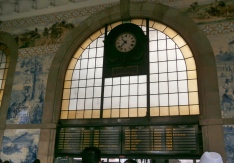 Bento Station was built on the site of a burnt down Benedictine Monastery.  In the 1900s, King Carlos I laid the first stone of the station as show of his support. The station was completed in 1916, and represents a mammoth undertaking, not the least thanks to the 20,000 traditional Portuguese azulejos created at the hand of Jorge Colaço.

The panels depict historic scenes from King João I, Queen Philippa and Prince Henry the Navigator, as he conquered Ceuta (Morocco). Other scenes memorialise meetings between kings and notables along scenes of everyday life.

Good to know: Bento train station is very busy; keeping an eye to visiting outside rush hour traffic will make for a leisurely, unhindered exploration.n

In closing, a few more pictures of this enchanting city: