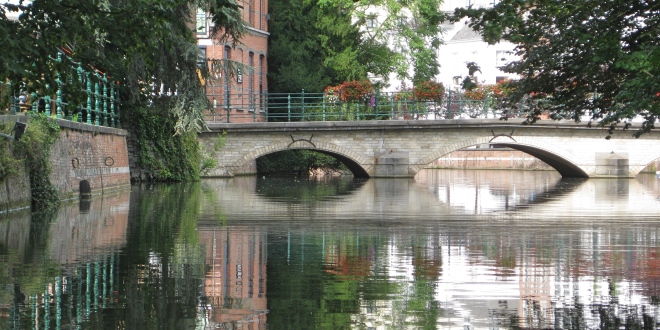 It was a lovely day in the neighbourhood when I arrived at Lier station.  Although I lived many years in Belgium, I had never really taken the time to visit this medieval city in the province of Antwerp.

The occasion was the first birthday of my great grandson and I was quite excited to finally see him in person. There was plenty of time to have a wander about town.

Located in the Flanders (northern Belgium) where the Great and Little Nete rivers meet, most sources place Lier’s origins in the 8th. century. Around the 14th. century, Lier became a significant textile hub and was bestowed numerous privileges by the Lords of the time. Lier suffered a number of sieges at the  end of the 14th. century, and in modern times, WWI bombardments partly destroyed the city.

Constructed in the 14th. century, the tower is a fortification whose clock was added in the 20th. century on the occasion of Lier’s Centenary. Designed by clock-maker Louis Zimmer in 1930, this unique work showcases different dials that function as metonic cycles (named after the 5th century Greek astronomer Meton) as well as solar and lunar cycles and a zodiac.  Over the years, the Zimmer clock has kept its precision. Integrated drawings, steady hands and mechanical globes, provide time-related information. Every fifteen minutes, three statues chime the bells. They represent three stages of life: childhood, adolescence and adulthood. On the hour, the statue of an old man appears along the other three. At midday, a parade of former kings and mayors appears and tells the story of Belgium’s 100 years of independence. Inside the tower is the Astronomical Studio; the second floor holds its gear mechanism. Every six seconds, the 75 dials are adjusted by a master clock, an unequalled feat of accuracy and creativity.

Just around the corner of the Zimmer Tower, on a green knoll, the statue of a shepherd leading his sheep beckons passers-by. Immortalised byLier sculptor Bertro, the monument reminds residents of Lier of an amusing anecdote.  Legend has it that in the 14th. century, as a thank you for services rendered during the struggle with the city of Mechelen, Jan II, Duke of Brabant and Limburg, offered the citizens of Lier a reward of their choice.  The Duke proposed a cattle market or a university.  The people of Lier chose the cattle market, after which the Duke apparently sighed; “Ah, these muttonheads”. The university was ultimately granted to the city of Leuven in 1425. The sheep’s head is the symbol of Lier, and tasty versions are found in many chocolate stores and among other artisan creations.

The Beguinage of Lier, 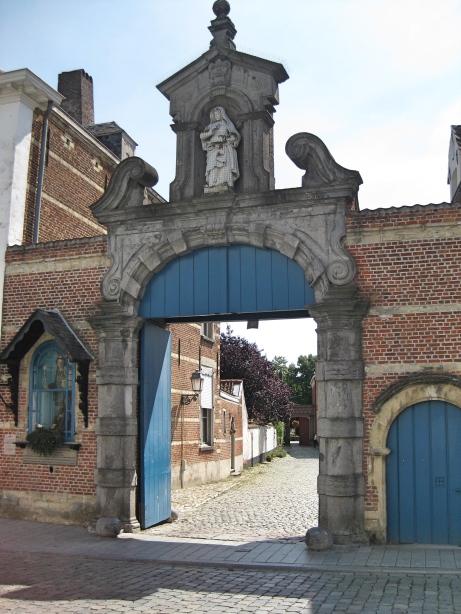 had its origins in the 13th. Century. It was quite fascinating to wander the complex of 162 small houses and closed courtyards, connected by 11 alleys.

It was built specifically for the beguines; women who chose to live a communal life outside a convent setting. The beguines were predominantly widows and single women. They lived our their faith independent of any religious order, harmonising spiritual and secular life. Their autonomous rule was guided by a “Grande Dame”. There was no obligation to stay at the Beguinage, and the women could leave any  time they chose. The last Beguine died in 1994.

Beguinage Stations of the Cross

Apparently, or so the story goes, the houses giving out on the Nete had shuttered windows. This was to avoid that the Beguines  be tempted by seeing the scantily clad sailors rowing by.

The 1671 St Margaret’s Church, at the centre of the complex, was dedicated to Saint Margaret of Antioch, the patron saint of Lier and of the Beguines. The facade is a combination of Baroque and Rococo style. At the main entrance of the Beguinage, Saint Begga, also patron saith of the Beguines, looks on from her perch above the gate.

In the middle of the Calvary Mountain, and enclosed in a small garden, is the white sculpture of the Pieta under a light blue portico, reminding us to give pause and reflect on the sacrifice of Christ.

Just inside the main entrance is an alcove with the wooden statue of Our Lady of Remedy.  According to a Legend, the statue would have washed up at the banks of the Nete,  and a number of miracles were attributed to the Virgin Mary.

Beguinage: prayers against misfortunes; instructions re. indulgences and shrine to Our Lady of Remedy

Flat-bottom barges used to transport fish on the Nete river, which were then sold at the Fish Market. A lovely area, which also boasts one of the oldest water pumps (1835).

One mustn’t forget Lier’s famous son and Flemish writer, known for his regional oft colourful stories. He was born, lived and died in Lier (1886-1947). He was the 13th. of 14 children! A commemorative bust features prominently at the banks of the Nete. His stories touched on everyday life and around women of the Beguinage and other Flemish characters.  Felix Timmermans was multi-talented.  Besides being an author, he wrote plays and created paintings and drawings. 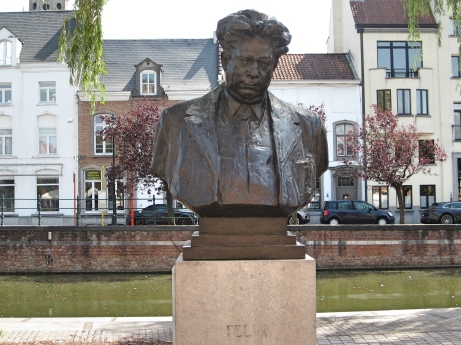 He is best known for his book “Pallieter”, which was extremely popular and received with open arms. Written during the war, Pallieter was a happy-go-lucky young man who enjoyed life and seized the day. His escapades brought much needed humour and cheer to Flemish and Dutch families during the dark years of war.

When the time came to visit my great grandson, I rented a bike and cycled along the scenic Nete rivers. The weather was glorious with a slight breeze caressing my face. The bike path weaved around pastoral views, never leaving sight of the Nete. The pretty picture invited to stop along the way to admire and absorb the picturesque environment. The Nete originates in Lier, where the Big Nete and Little Nete meet.

I had a wonderful visit with my granddaughter and partner, and my great grandson  took to me right away.  We had a great time playing. Taking him in his pram around the neighbourhood, Elliot was full of mirth at the sight of sheep and cows in the farmers fields. We spent lovely few days together and I’m already impatient for a next visit!

On Sunday, my friends came over from Antwerp and we took a ride down the Small Nete on one of the flat-bottom boats.  The helmsman regaled us with colourful stories, while pointing out historical buildings.

Boatride on the Nete River

Afterwards we ambled through the city, casting a look at St. Peter’s Chapel and exploring Saint Gummarus Church.

We took breaks  at a few cafés on the Great Square.  A nice way to people watch and at the same time enjoy the view of the imposing 15th. century Town Hall, which in times passed used to be the Clothmakers’ Hall. 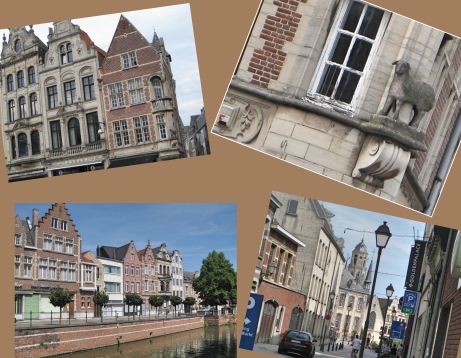 Looking at its architecture, one is struck by the many styles.  The church proper, in Brabantine style, took two centuries to complete.  The 83 m (272 Ft)  high tower, named the Peperbus (the Pepper Pot), has 52 bells. 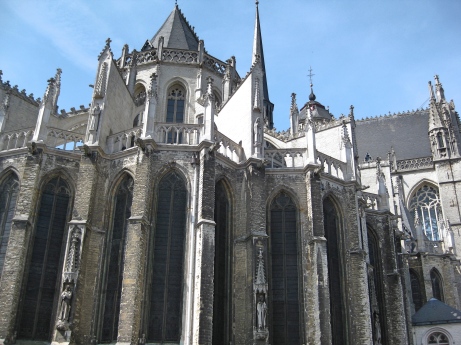 It took close to four centuries to build, owing to the many misfortunes that occurred and hampered its construction. The tower’s foundation rests on pelts. The bottom part of the tower is Gothic, while the consecutive octagons are late Gothic and Baroque, with the tower’s roof in Rococo style. We took a pass on climbing the 296 steps… maybe on a next visit.

In the meantime, summer made way for autumn and winter, and as I’m writing, we are only a week away from Christmas and nearing the end of the year.  What better time to wish you all a very joyous, peaceful and happy Christmas and a New Year filled with wonderful surprises!